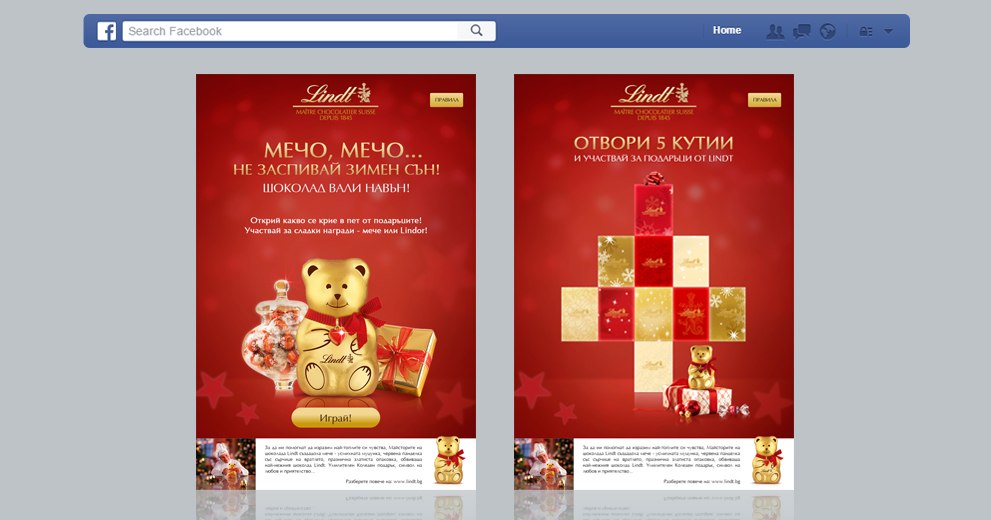 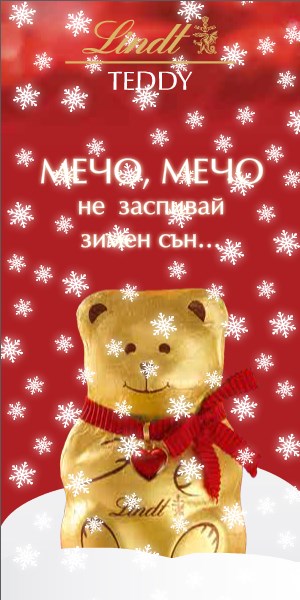 Tеddy Lindt was kindly called not to fall into a winter sleep before Christmas! Because this sweet chocolate bear is a Christmas sweetheart and a warm and friendly feeling ambassador for the special holiday!

Teddy Lindt could be won in the Facebook game “Open five boxes!” carried out on “Chocolate Lindt, Bulgaria” official Lindt Facebook page, and also in a trade promotion “Buy Teddy and win him a friend!”, which was communicated with a radio spot on the national air of several radio stations.

Besides in the shopping chains Teddy Lindt showed up in internet with an active internet banner campaign.

It becomes more than clear that Teddy falling into sweet winter sleep was recommendable only after the holidays!

Teddy, Teddy, Don’t fall into a winter sleep! Chocolate is raining outside!

Discover what has been hidden in 5 of the present boxes on the Christmas tree! Participate for Teddy or LINDOR as a prize! Warm the hearts of your beloved persons!

There is option to click on five boxes and to see what is hidden inside. If you open five Teddies you automatically win a Lindt chocolate Teddy. Otherwise you take part in a raffle for 20 LINDOR boxes.

You can take part only once and also to suggest the game to your friends!

Good luck and have fun with Lindt!

Radio spot communicating trade promotion – purchase one Lindt Teddy and win him a second one for a friend.

Teddy, Teddy
Don’t fall into a winter sleep…
Chocolate is raining outside
Click and win a Christmas friend!

The internet banner communicates options for winning a Lindt Teddy before Christmas. You can participate in a trade promotion or in a Facebook game.